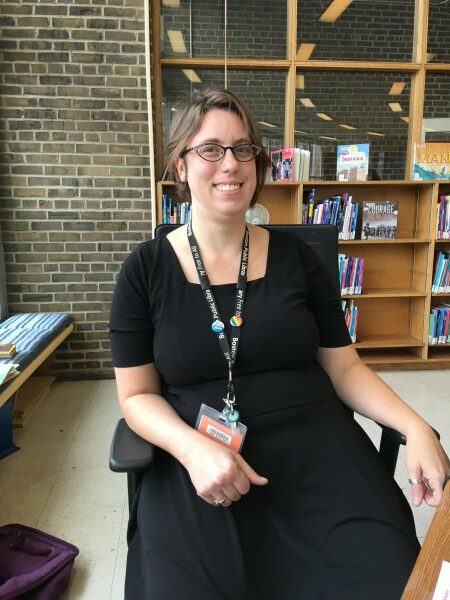 Like many people, Celeste Bocchicchio-Chaudhri started down many different paths before finding a career that was a perfect fit. She found her true calling in library science and recently became the new children’s librarian for the Roslindale Branch Library. She spoke to the Friends about her life’s journey so far and the programs and initiatives she would like to do at her new job.

Celeste started shelving books in the local library in her hometown of Kent, Ohio when she was 16 years old. When she attended Indiana University of Pennsylvania, where she studied religion and anthropology, she came back to the library during summer and winter breaks handling interlibrary loans and putting protective plastic covers on books. But she didn’t consider a career as a librarian at that time.

“I wanted to be a fantasy writer,” she said. “I studied religion and anthropology so I could understand people and how they interacted.”

After graduation, she briefly served in the Peace Corps, where she spent time in Bangladesh. When she came back to America, Celeste studied at the University of Michigan and graduated with a master’s degree in South Asian studies. Celeste then began a Ph.D. program in gender and sexuality studies at Emory University but quickly realized that the program wasn’t for her.

“I became frustrated with the academic side of the program,” she said. “I realized that I didn’t want to study one topic for the rest of my life. I was interested in many topics and wanted to find a career that let me explore those different interests.

Celeste came to Boston in 2010 and worked in a daycare for a year before becoming a shelver at the Roslindale branch. It was at this time she realized that at many times in her life, she came back to the library, and that was possibly a sign that this is where she should be pursuing a career.

“I realized that becoming a children’s librarian brought many things together for me,” she said. “I get to know a little about everything. I get to work with kids, showcase my artistic self, and pursue my social justice activism.”

Celeste went back to school and got a master’s degree in library science from Simmons College in 2016 and was working at Copley Library before coming to the Roslindale branch in September.  She also realized that her different life experiences and perspectives informed how she wanted to serve Roslindale, especially when it comes to racial and gender equality and drawing from her anthropology courses.

“My goal is to have programs for every age of a child that comes through our library,” Celeste said. “I am only one person, but I want to try and cover as many different areas as possible.”

Since starting the job, she has already implemented two new programs. One of those programs is Bouncing Babies, which will continue during the renovation at the Roslindale Community Center on Fridays, 11 am – 12 pm. Celeste created this program because she remembers being a new mom at home and wanting to get out the house. This program provides not only a weekly educational program for babies but also a welcome respite for parents to talk to each other.

The other program is Pajama Storytime, which is designed for parents who can’t attend most children’s activities usually held during the daytime.

“It’s important to have evening programs so that working parents can take advantage of the library,” she said.

“Speaking from an authentic place is important,” she said. “I recognize that most librarians are middle-class white ladies like me, so I want to bring in people who have different perspectives. For example, if we are doing a black history month celebration, I don’t think I should be running the program. It would make more sense to invite a black speaker or performer to facilitate that program.”

Celeste wants to start a similar race and inclusion program that the Friends of Roslindale Library created but for kids, where there would be more discussions about diversity. During the renovation, she will do a diversity audit of the entire children’s book catalog at the Roslindale branch. This process is not necessarily a quality check, but rather a representation check. For example: Are there any books with a person of color on the cover? Do the characters in the book covers accurately reflect the characters in the book? Do all the books featuring black, Latino, and LGBTQ characters focus on slavery, immigration, and coming out stories, respectively? Are there any books featuring diverse characters not primarily focusing on race or prejudice?

Celeste plans to stay involved in the community during the renovation by giving out books at the Home for Little Wanderers every second Tuesday of the month and visiting schools, daycares, and headstarts around Roslindale. She also hopes to organize a teen advisory council soon with local teens to help plan library events for them.

In her spare time, she reads a lot of children’s books. Her favorite children’s book right now is Sal and Gabi Break The Universe by Carlos Hernandez, which is a “brilliant sci-fi romp with Cuban influence.” She is currently reading the young adult version of Things That Make White People Uncomfortable by Michael Bennett.

Celeste lived in Roslindale for seven years before moving to Hyde Park, where she lives with her husband, two children, two cats, six fish, and two hamsters. It is a real treat for her to come back to Roslindale.

“I’m excited to be here,” she said. “I love Roslindale, and I can’t wait to work with the community.”