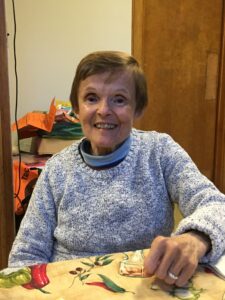 Roslindale branch children’s librarian Paula Wiktorowicz has always been an avid reader. She says she started reading when she was a one-year-old. Paula turned her love of books into a long career working for the Boston Public Library (BPL). She has worked for the Roslindale Branch since 1981, and she will be retiring in August. Before she leaves, Paula wanted to reflect on her service to the library and the Roslindale community.

Paula thanks her father for instilling in her a love of reading at an early age. Her father didn’t want Paula and her siblings to watch too much television growing up in Rhode Island.

“I practically grew up in the Providence Public Library,” she said. ” My dad gave us books to read all the time, and we only watched TV for one hour a day.”

Her father, a big history buff, had young Paula read A History of the English-Speaking Peoples by Winston Churchill, a four-volume history of Britain and its former colonies and possessions throughout the world. Paula says the book helped to raise her reading level.

During her years attending Providence College, she worked in the school library. It was here she was inspired to become a professional librarian. After her graduation, Paula moved to Boston to attend Simmons College where she would earn her first master’s degree in library sciences in 1977 and later a second master’s degree in children’s literature in 1987. During her first stint at Simmons, she also worked at Wheelock College’s library and the Fenway Star Market, where she says she “tossed grapefruits.”

During this time, the country was going through a recession, and the Vietnam War was coming to a close. There were not many librarian jobs available for Paula to apply for at the time. She saw a listing by chance for a temporary children’s librarian position at the North End branch. Paula applied and got the job. She was only supposed to be there a few months taking over for a woman who was on maternity leave. Paula got the job permanently when the woman decided not to come back to work. At this time, BPL workers also did “dual branch” duties, meaning they worked at two libraries at the same time. Paula worked at and walked back and forth between the North End and West End branches for five years.

In 1981, Paula came to the Roslindale branch originally as a temporary children’s librarian due to budget issues. Her position not only became permanent, but she also has been the branch’s acting head librarian three times during the last 38 years.

Before the internet became a major resource, most people depended on librarians to help them find information. During the late 1980s, when Roslindale Village was going through a revitalization phase, Paula provided Roslindale Village Main Street (RVMS) researched market statistics that would be used to apply for grants that supported local businesses. Paula also played a role in demographics research for getting a supermarket into the Village, which would eventually help with opening the Village Market in 1997.

“I had to find demographics on Roslindale residents, like income, age, and race,” Paula said. “The statistics helped to give a better understanding of the community and how businesses could use them.”

Paula has seen a lot of changes during her tenure sitting at her desk facing the front windows of the library; not just in Roslindale Village, but also in how patrons use the library. Technology has become a dominant force in library use today. This is a contrast to when Paula had to use reference index cards to find books and information at the beginning of her career.

“Reference on the internet is good, but librarians are still important for reference on specific information and books,” Paula said. “Many people still use printed material. It will be a long time before books go away. Also, teachers can tell when a book report is copied from the internet.”

Paula’s favorite programs which she had enjoyed running have been the Reading Readiness and Preschool programming because, like herself, she can get the kids started early in literacy.

Over the years, there have been many children who came back to the library as adults to thank Paula for influencing them. She remembers one man who remembered her from the North End branch and said she helped to turn his life around through reading, and now he does creative writing. Paula hopes that the Roslindale branch will start a creative writing program for children and teens and maybe publish their books when the library reopens after it is renovated.

By the way, Paula’s favorite book is The Trumpeter of Krakow by Eric Kelly.

As for her plans after she retires, Paula said she wants to sign up for some creative writing classes for pleasure. Paula is always invited back to the library if she ever writes a book and have the Friends host an author talk for her!

“It’s been a pleasure working with kids,” she said. “I have always wanted to do it and lucky to do it.”