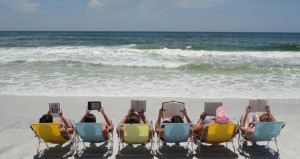 Need some reading material at the beach, on vacation or staycation, on the road or anywhere else this summer? Come by the library to borrow a book! Below are some recommendations. The following books can be borrowed from the Roslindale Branch Library.

Cape Cod Noir
By David L Ulin
Los Angeles Times book critic David L. Ulin has been vacationing in Cape Cod every summer since he was a boy. He knows the terrain inside and out; enough to identify the squalid underbelly of this allegedly idyllic location. His editing prowess is a perfect match for this fine volume. Youthful alienation and despair dominate the 13 stories in Akashic’s noir volume devoted to Cape Cod. Setting the bleak tone is William Hastings’s graphic “Ten-Year Plan,” in which an embittered ex-con finds work at DePuzzo’s restaurant amid coke sales and rival immigrant groups eager to get back home. In Elyssa East’s compelling “Second Chance,” a teenage inmate at a reform school is haunted by a fatal car accident. Marred only by an improbable ending, Seth Greenland’s “Bad Night in Hyannisport” convincingly portrays a college student’s binge-drinking, arrest, and hangover. Paul Tremblay’s “Nineteen Snapshots of Dennisport,” the most imaginative selection, reveals a tragedy through descriptions of a boy’s photo album from a family vacation. Dana Cameron’s “Ardent” vividly shows the constraints of being a woman in Puritan times.

All the Summer Girls
By Meg Donohue
In Philadelphia, good girl Kate is dumped by her fiancé the day she learns she is pregnant with his child. In New York City, beautiful stay-at-home mom Vanessa finds herself obsessively searching the Internet for news of an old flame. And in San Francisco, Dani, the wild child and aspiring writer who can’t seem to put down a book– or a cocktail– long enough to open her laptop, has just been fired again. In an effort to regroup, Kate, Vanessa, and Dani retreat to the New Jersey beach town where they once spent their summers. Emboldened by the seductive cadences of the shore, the women begin to realize just how much their lives, and friendships, have been shaped by the choices they made one fateful night on the beach eight years earlier– and the secrets that only now threaten to surface.

One Summer: America, 1927
By Bill Bryson
The summer of 1927 began with Charles Lindbergh crossing the Atlantic. Meanwhile, Babe Ruth was closing in on the home run record. In Newark, New Jersey, Alvin “Shipwreck” Kelly sat atop a flagpole for twelve days, and in Chicago, the gangster Al Capone was tightening his grip on bootlegging. The first true “talking picture,” Al Jolson’s The Jazz Singer, was filmed, forever changing the motion picture industry. All this and much, much more transpired in the year Americans attempted and accomplished outsized things—and when the twentieth century truly became the American century. One Summer transforms it all into narrative nonfiction of the highest order.

Red Summer: The Summer of 1919 and the Awakening of Black America
by Camron McWhirter
A narrative history of one of America’s deadliest episodes of race riots and lynchings traces how black Americans were brutally targeted by anti-black uprisings that culminated in hundreds of deaths and set the stage for the civil rights movement.

The Dangerous Summer
By Ernest Hemingway
The Dangerous Summer is Hemingway’s firsthand chronicle of a brutal season of bullfights. In this vivid account, Hemingway captures the exhausting pace and pressure of the season, the camaraderie and pride of the matadors, and the mortal drama as in fight after fight the rival matadors try to outdo each other with ever more daring performances. At the same time Hemingway offers an often complex and deeply personal self-portrait that reveals much about one of the twentieth century’s preeminent writers.

A Death in Summer
By Benjamin Black
On a sweltering summer afternoon, newspaper tycoon Richard Jewell―known to his many enemies as Diamond Dick―is discovered with his head blown off by a shotgun blast. But is it suicide or murder? For help with the investigation, Detective Inspector Hackett calls in his old friend Quirke, who has unusual access to Dublin’s elite.

Shadows of A Down East Summer: An Antique Print Mystery
By Lea Wait
In the summer of 1890, two young women posed for artist Winslow Homer on the coast of Maine. What happened that summer, the secrets the women kept, and the lies they told, changed their families forever. Now, more than a hundred years later, one of their descendants has been murdered, leaving to antique print dealer Maggie Summer the family papers that may finally reveal the truth. Maggie’s vision of a relaxing vacation in Maine- antiquing with beau Will Brewer and visiting his Aunt Nettie- turns into a murder investigation. Maggie must discover which of the family myths are based on reality, before someone she cares about becomes the next victim.With the centennial of Homer’s death in 2010, there is renewed interest in his work and in the renovation of his studio in Prouts Neck, Maine, where some of the novel’s action takes place.

The Second Summer of the Sisterhood
By Ann Brasheres
With a bit of last summer’s sand in the pockets, the Traveling Pants and the Sisterhood that wears them embark on their 16th summer. Bridget: Impulsively sets off for Alabama, wanting to both confront her demons about her family and avoid them all at once. Lena: Spends a blissful week with Kostos, making the unexplainable silence that follows his visit even more painful. Carmen: Is concerned that her mother is making a fool of herself over a man. When she discovers that her mother borrowed the Pants to wear on a date, she’s certain of it. Tibby: Not about to spend another summer working at Wallman’s, she takes a film course only to find it’s what happens off-camera that teaches her the most.

Seventeenth Summer
By Maureen Daly
Seventeen-year-old Angie, living with her family in Fond du Lac, Wisconsin, finds herself in love for the first time the summer after high school graduation.

The Best Summer Programs for Teens: America’s Top Classes, Camps, and Courses for College-bound Students
By Sandra Berger
Record numbers of teens are applying to selective universities and the competition to gain entrance into college is tougher than ever before. The Best Summer Programs for Teens helps teenagers find the coolest, most exciting, and most fulfilling summer programs across the United States. College-planning expert Sandra L. Berger provides students and parents with advice on using summer opportunities to help gain entrance into selective universities, and guidance onresearching, choosing, applying for, and making the most out of summer programs. Students will be able to peruse the updated directory of more than 200 of the best summer opportunities in the areas of academic enrichment; fine arts; internships and paid positions; leadership and service; math, science, computer science, and technology; and study abroad or international travel, to find the program that fits them best.

Swifter, Higher, Stronger: A Photographic History of the Summer Olympics
By Sue Macy
A detailed look at the history of the Olympic Games, from their origins in Ancient Greece, through their rebirth in nineteenth century France, to the present, highlighting the contributions of individuals to the Games’ success and popularity.

The Freedom Summer Murders
By Don Mitchell
In June of 1964, three idealistic young men (one black and two white) were lynched by the Ku Klux Klan in Mississippi. They were trying to register African Americans to vote as part of the Freedom Summer effort to bring democracy to the South. Their disappearance and murder caused a national uproar and was one of the most significant incidents of the Civil Rights Movement, and contributed to the passage of the Civil Rights Act of 1964. Mitchell takes a comprehensive look at the brutal murders of James Chaney, Andrew Goodman, and Michael Schwerner, through to the conviction in 2005 of mastermind Edgar Ray Killen.

The Boys of Summer
By Roger Kahn
This is a book about young men who learned to play baseball during the 1930s and 1940s, and then went on to play for one of the most exciting major-league ball clubs ever fielded, the team that broke the color barrier with Jackie Robinson. It is a book by and about a sportswriter who grew up near Ebbets Field, and who had the good fortune in the 1950s to cover the Dodgers for the Herald Tribune. This is a book about what happened to Jackie, Carl Erskine, Pee Wee Reese, and the others when their glory days were behind them. In short, it is a book about America, about fathers and sons, prejudice and courage, triumph and disaster, and told with warmth, humor, wit, candor, and love.

The Beet Fields: Memories of A Sixteenth Summer
By Gary Paulsen
The author recalls his experiences as a migrant laborer and carnival worker after he ran away from home at age sixteen.

Here is the full BPS list of recommendations for Grades 9-12 and Grades 6-8.

Alvin Ho: Allergic to Camping, Hiking and Other Natural Disasters
By Lenore Look
When Alvin’s father takes him camping to instill a love of nature, like that of their home-town hero Henry David Thoreau, Alvin makes a new friend and learns that he can be brave despite his fear of everything.

Crafts to make in the Summer
By Kathy Ross
Presents twenty-nine easy-to-make craft projects with summertime themes, including a mouse sunglasses case, a firecracker finger puppet, and a seashell candle holder.

Last Summer With Maizon
By Jacqueline Woodson
Eleven-year-old Margaret tries to accept the inevitable changes that come one summer when her father dies and her best friend Maizon goes away to a private boarding school.

Carl’s Summer Vacation
By Alexandra Day
Carl and Madeleine are supposed to be napping while Mom and Dad get the summer cabin ready for company but escape from the hammock to do some exploring on the lake.

One Crazy Summer
By Rita Williams-Garcia
In the summer of 1968, after traveling from Brooklyn to Oakland, California, to spend a month with the mother they barely know, eleven-year-old Delphine and her two younger sisters arrive to a cold welcome as they discover that their mother, a dedicated poet and printer, is resentful of the intrusion of their visit and wants them to attend a nearby Black Panther summer camp.

What Happens in Summer
By Sara Latta
Why do we have summer? Why is summer weather so warm? How does summer weather affect plants and animals? What do people do during the summer? New readers will delight in learning the answers to these questions. There is even an experiment at the end of the book so readers can be a scientist!

Judy Moody and the Not Bummer Summer (DVD)
Feisty, fearless Judy Moody is looking forward to the most super-duper, double-rare summer vacation ever. The trouble is, her parents are called out of town and her BFFs are going away with their own families. That leaves Judy trapped at home with her pesky brother Stink under the watchful eye of Aunt Opal. But with a little playful planning, and a lot of imagination, Judy turns a snoresville summer into the way-not-boring adventure of a lifetime!

Here is the full BPS list of recommendations for Kindergarten – Grade 2 and Grades 3 -5.